Reciprocal translocations are generated when breaks occur in different chromosomes and the ends are swapped. 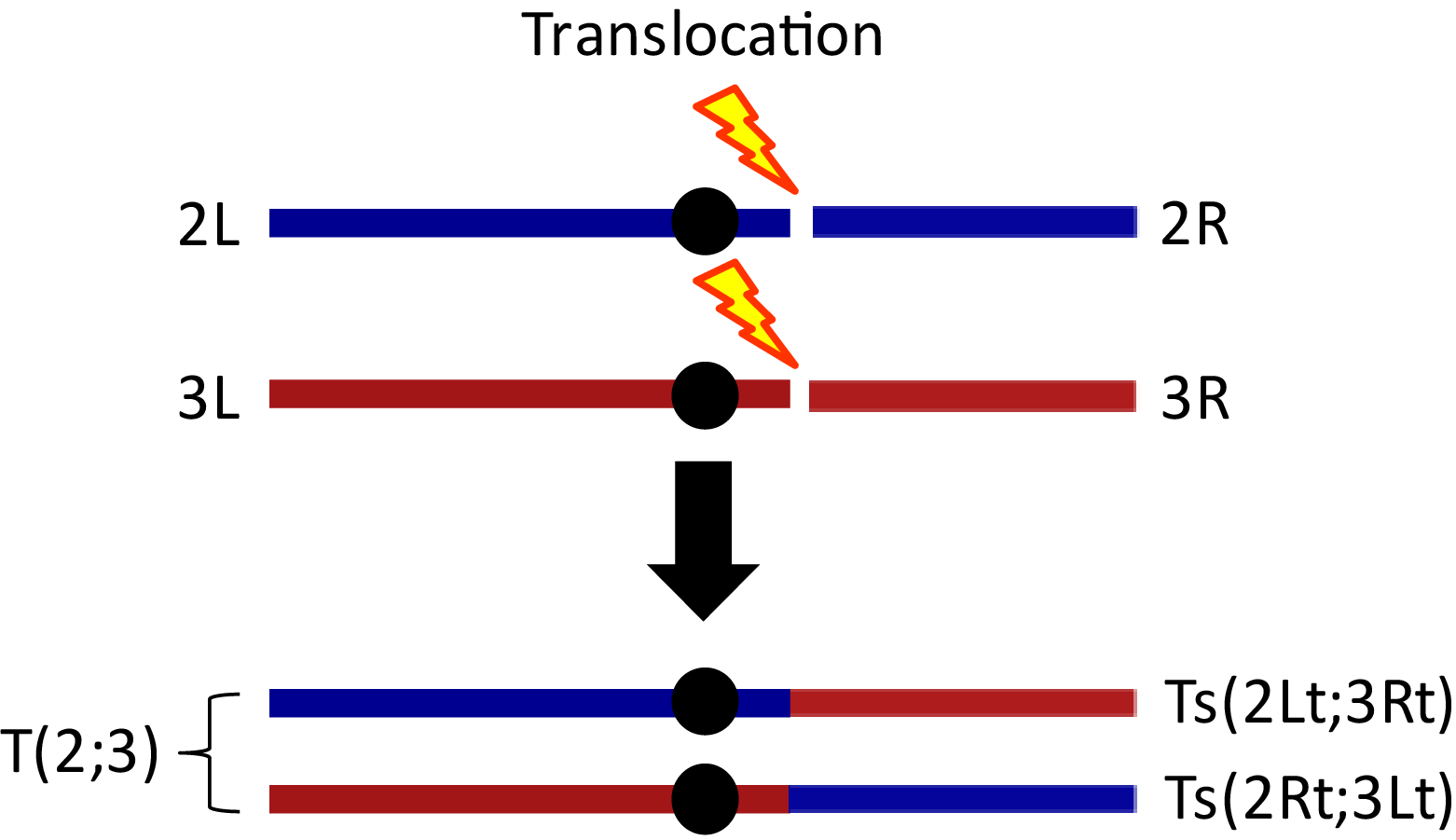 Translocation breakpoints often disrupt genes. About a third of our stocks with translocations are maintained for their breakpoint-induced mutations. They are shown here.

The following stocks carry translocations that juxtapose euchromatic and heterochromatic regions and lead to position-effect variegation of the genes noted.

Reciprocal translocations between two balancer chromosomes assure that the balancers are always inherited together, because alternate segregation in meiosis I produces euploid progeny that live while adjacent segregation produces aneuploidy progeny that die. 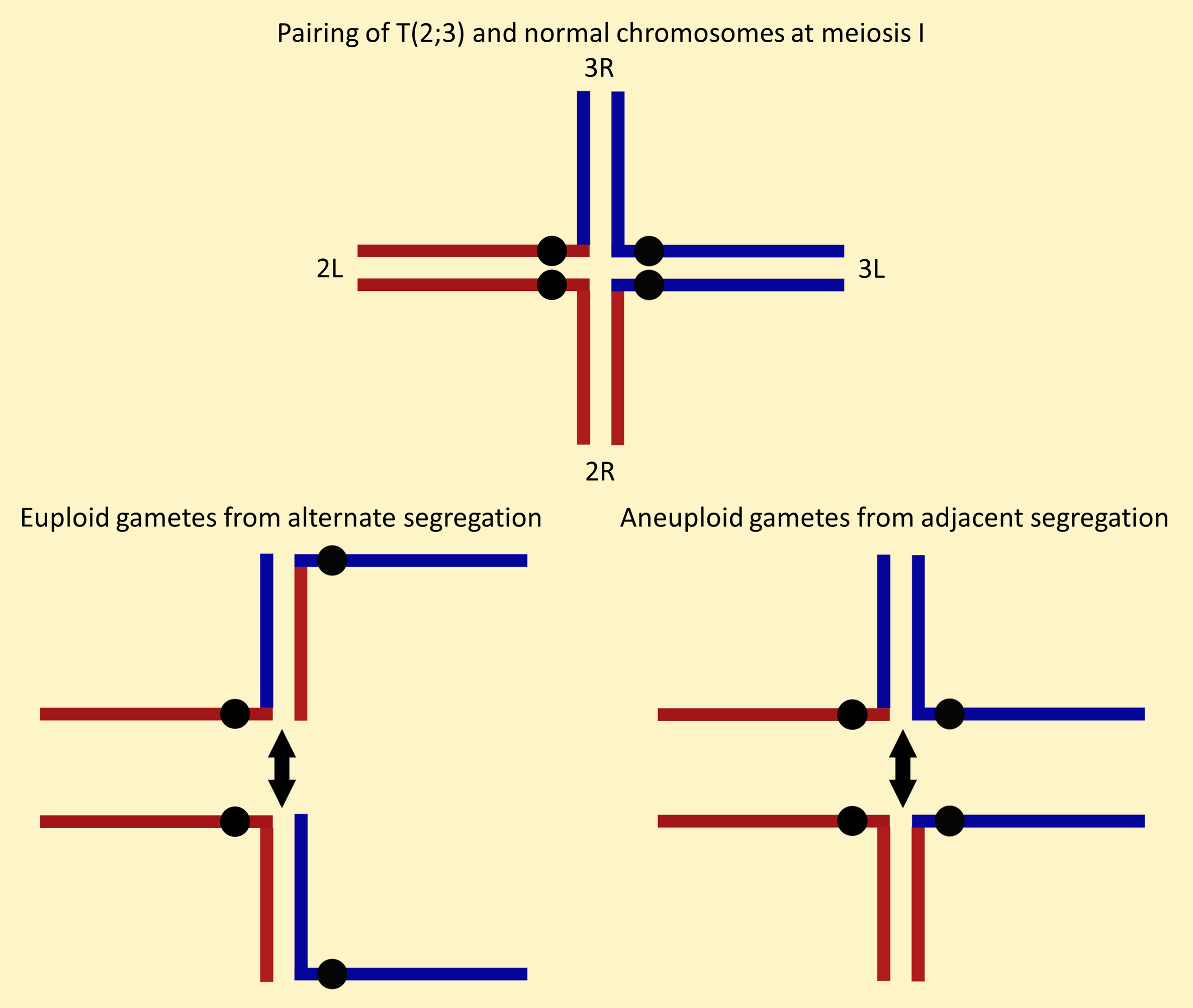 We have stocks with the following translocations between balancers:

A full list of stocks with translocations between balancers is given here.

T(2;3)ap[Xa] was generated between progenitor chromosomes with inversions, so the resulting chromosomes have several breakpoints which effectively balance regions of 2R and 3R: 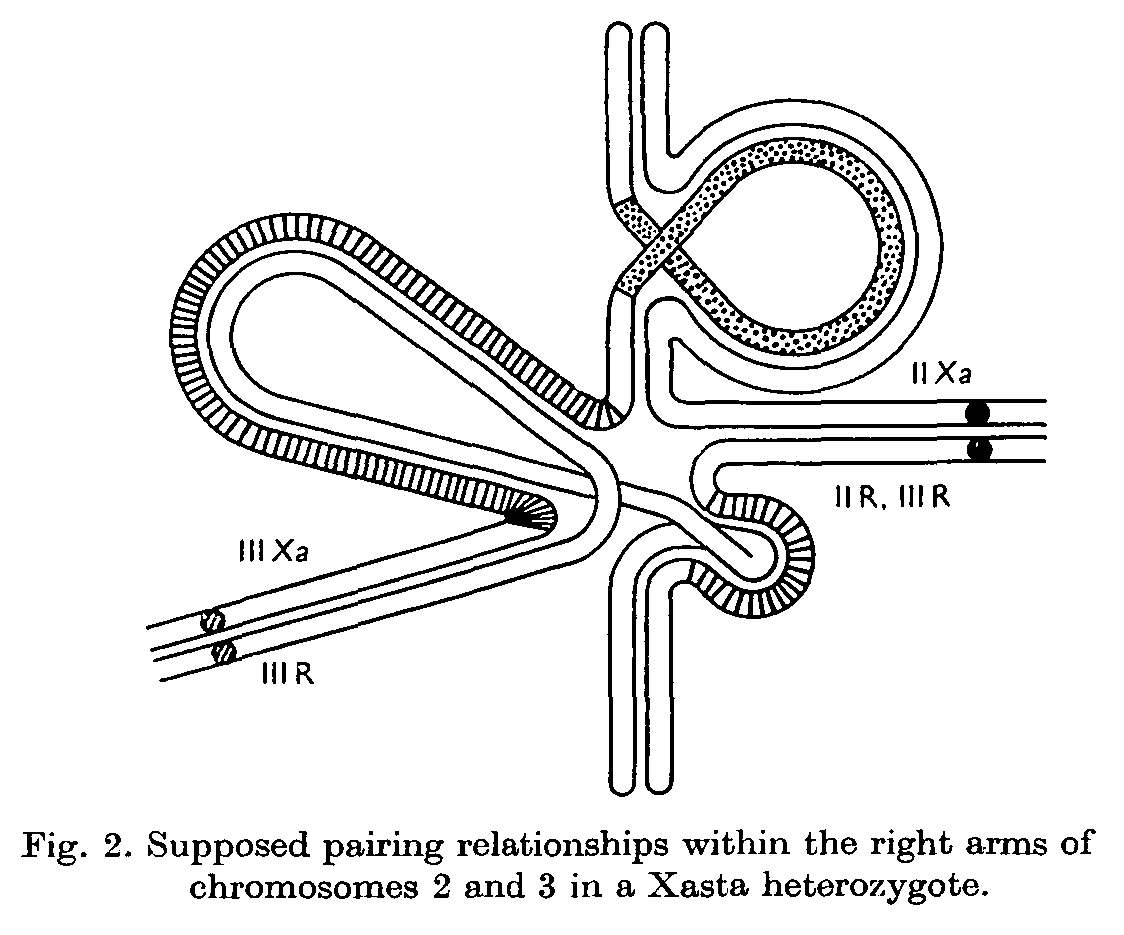 The dominant Xasta mutation in the apterous gene caused by the translocation provides a convenient wing phenotype for following T(2;3)ap[Xa] in crosses. Like the translocations between balancers discussed above, second and third chromosome mutations maintained in stock with T(2;3)ap[Xa] will always be inherited together.

T(Y;2)CyO and T(Y;3)TMS are reciprocal translocations between balancer chromosomes and the Y chromosome. Males carrying these chromosomes will transmit the balancers to only male progeny, because the translocated Y and autosome will segregate from the normal X and autosome in meiosis I. This can be useful in experimental crosses.

T(Y;3)TMS carries P{Delta2-3}, a source of P transposase. It is useful for screens where one wishes to introduce a genomic source of transposase in one generation and assure it is absent in subsequent generations.

T(Y;2)CyO carries a dominant temperature-sensitive lethal mutation, l(2)DTS513[1], which can be used to kill males inheriting the translocation upon heat treatment and produce only virgin females from crosses.

T(1;2)OR64 and T(1;3)OR60 are translocations associated with dominant male lethality. They are useful for maintaining stocks of dominant female sterile mutations. 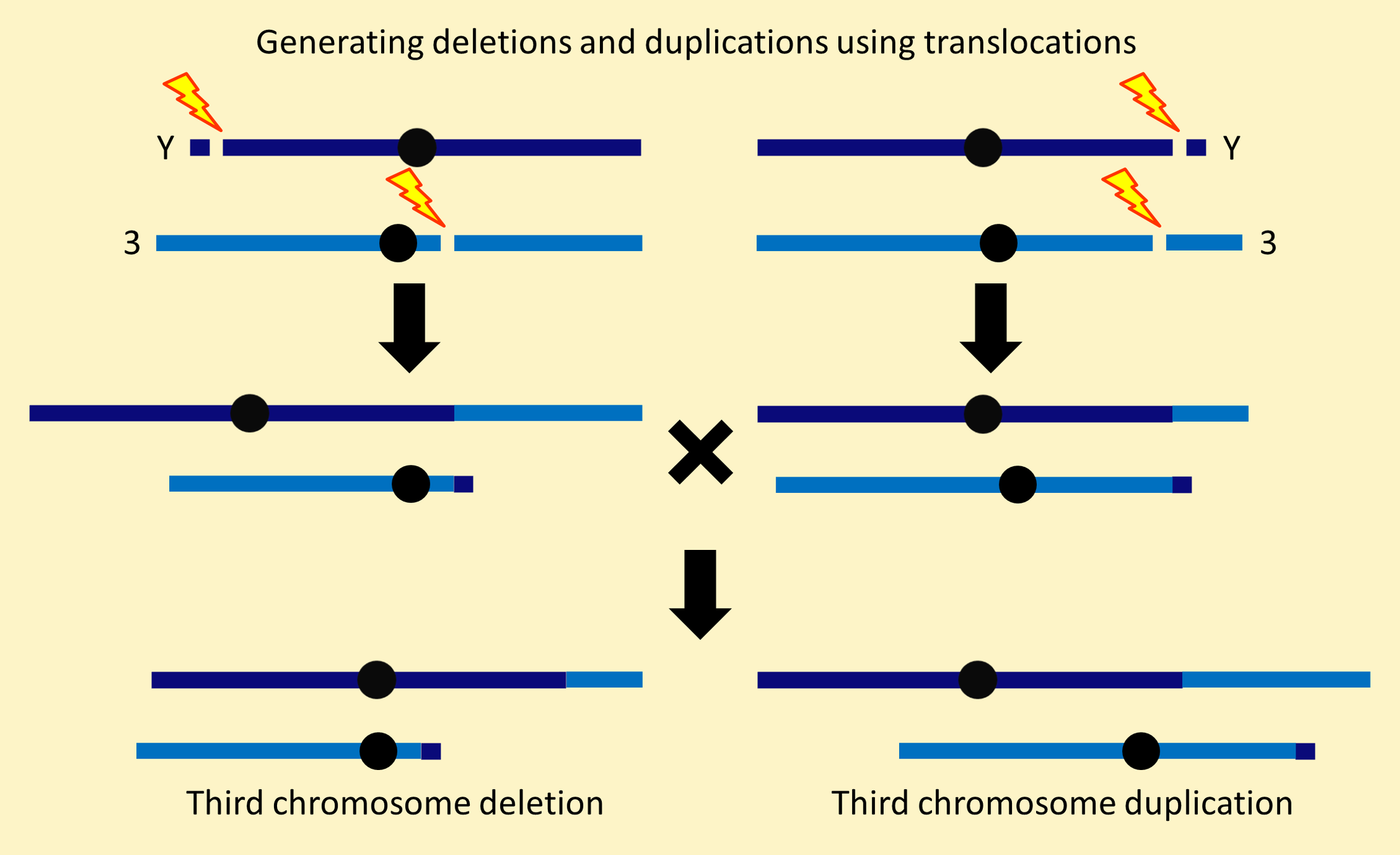 T(1;Y), T(Y;2) and T(Y;3) stocks for this “segmental aneuploidy” approach are available from Kyoto Drosophila Genomics and Genetic Resources for making X, second and third chromosome deletions and duplications.This approach can also be used with T(1;Y) chromosomes with breakpoints in X heterochromatin to create deletions and duplications of Y chromosome segments (see Gatti and Pimpinelli (1983)). It has proved to be the most effective way to create deletions of Y-linked male fertility genes, since conventional deletions on the Y chromosome are unstable. Translocation segregants from the following T(1;Y) stocks can be combined to make deletions.

Note that several T(Y;2) and T(Y;3) chromosomes are maintained because their breakpoints disrupt specific Y-linked male fertility genes (see Translocations that cause mutations above). These chromosomes are not maintained for creating deletions.

T(1;4)sc[H] is a reciprocal translocation with breakpoints near the tips of the X and fourth chromosomes. 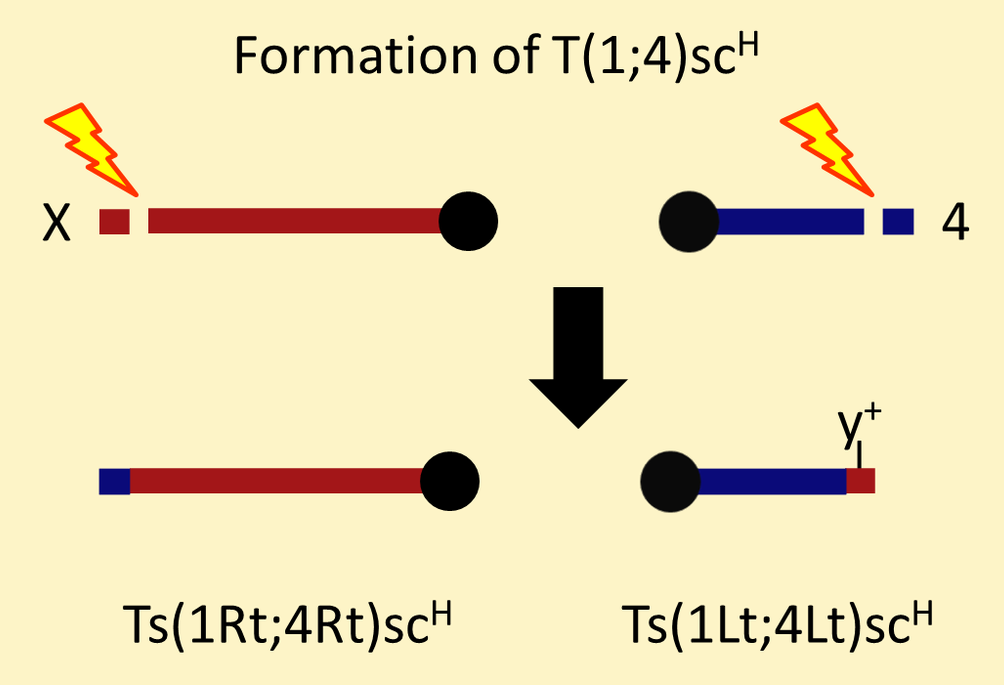 It is maintained in stock with a y[1]-marked attached-X. Males in the stock must carry both translocation segregants (Ts(1Lt;4Lt)sc[H] and Ts(1Rt;4Rt)sc[H]). Females may carry two normal chromosomes (and be phenotypically y[-]) or they may be heterozygous for Ts(1Lt;4Lt)sc[H], the fourth chromosome lacking its distal tip (and be phenotypically y[+]).

One can use the y[+]-marked translocation segregant (Ts(1Lt;4Lt)sc[H]) to deletion map mutations to the distal tip of the fourth chromosome. At least five lethal complementation groups including Cadps are removed by this terminal deletion.

The T(1;4)sc[H] segregant carrying the tip of the fourth chromosome (Ts(1Rt;4Rt)sc[H]) can be used as a deletion of distal X genes or as an interchromosomal duplication of the distal fourth chromosome, but these experimental uses are less common. 123

The y[+]-marked translocation segregant can be used as a deletion of 100C to 3Rt. This deletion removes RpL6, so heterozygotes will show Minute phenotypes and will likely have reduced viability. See Kongsuwan et al. (1986) for more details.

The other translocation component can be used as a Y-linked duplication of 100C to 3Rt.

T(1;2)sc[S2] is a reciprocal translocation between the tips of the X chromosome and 2R. It marks the tip of 2R with y[+]. This is useful for detecting mitotic clones formed by somatic recombination events within 2R.

Unlike similar duplications of y[+] onto the tips of other chromosome arms, both chromosomes of the reciprocal translocation T(1;2)sc[S2] must be present for flies to survive. This complicates clonal analysis crosses and we suggest you review previous studies that have used it before undertaking experiments.

We have a few stocks where a translocation is present, but it has nothing to do with the primary component of the stock and serves no particular purpose.