The in vivo GFP interference (iGFPi) method can be used to knock down expression of proteins tagged with EGFP and other GFP variants using RNA interference constructs. 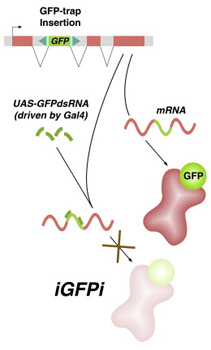 P{UAS-GFP.dsRNA.R} effectively knocks down expression of EGFP, but has not been tested with other GFP variants. It will not knock down expression of YFP or other non-GFP fluorescent proteins. Its use was described by Roignant et al. (2003) and Pastor-Pareja and Xu (2011).

The VALIUM-based "EGFP.shRNA" constructs were described by Neumuller (2012). They are effective against EGFP and EGFP derivatives (like EYFP) but are not effective against normal GFP or GFP derivatives. More information on these insertions, including the primer sequences used to make the constructs and estimates of the relative levels of knockdown can be found here in csv form or as an Excel file.

Lines for RNAi of other fluors can be found on the RNAi for non-fly genes page.